In this section, we'll discuss the problem of representing AI in the media, and how pictures of shiny humanoid robots mislead us as to what AI is, and also reinforce harmful stereotypes and plain bad taste. We provide a typology of what makes robot pictures inappropriate and terrible, and offer some guidelines for better representation of AI. 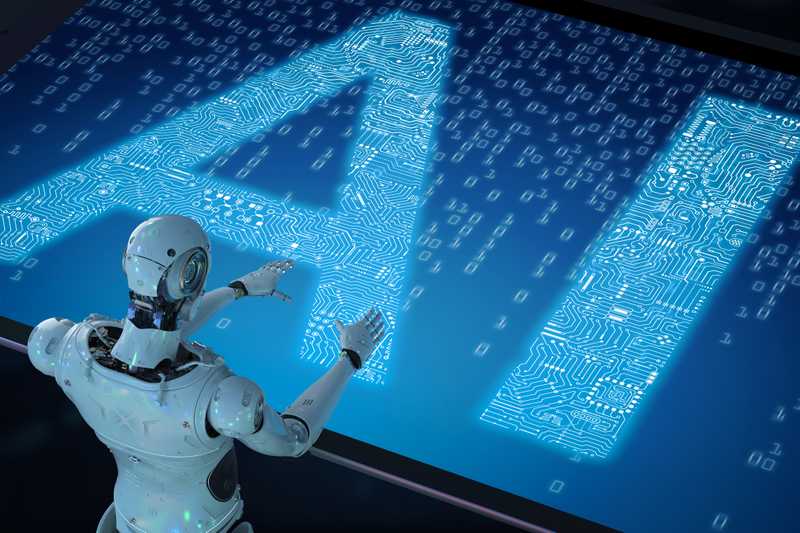 We've all seen tasteless, cringy images like the one above: a shiny, usually white, humanoid robot in some cliché scenario supposedly representing our shared technological future. Along with the ubiquitous Terminator images, these inappropriate and/or terrible pictures of robots are arguably the most visible of all misconceptions and inaccuracies about AI. We explicitly say inappropriate and/or terrible because we are, in fact, dealing with two separate (albeit usually intersecting) phenomena. Let’s begin with the more straightforward of the two: inappropriate robots. 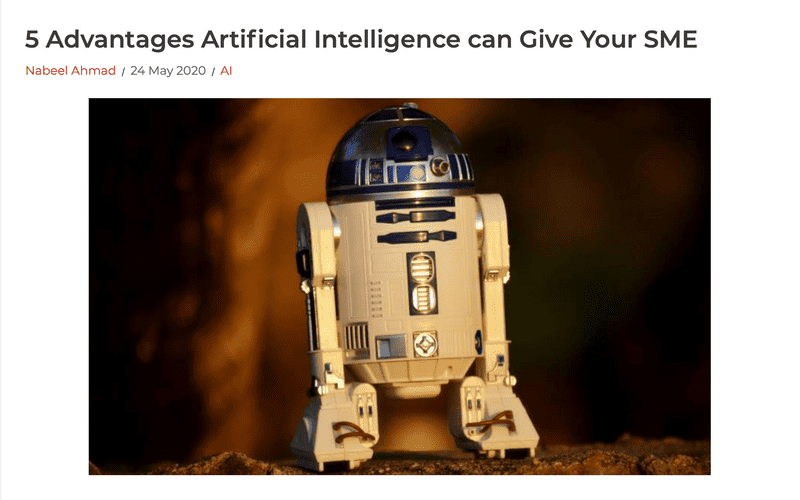 What we see in the image above is a picture of a (very famous) robot being used to illustrate an article about small and medium enterprises (SMEs) , a topic which in this case has nothing to do with robotics, at least in the physical sense. Such image-text combinations are in themselves harmless, and often quite hilarious for how misguided they are. The typical example consists of a news article about some topic with an artificial intelligence component to it, but nothing to do with robotics, being illustrated by a picture of a (usually) humanoid robot. Here are a couple of examples:

An article about AI and insurance (no robotics): 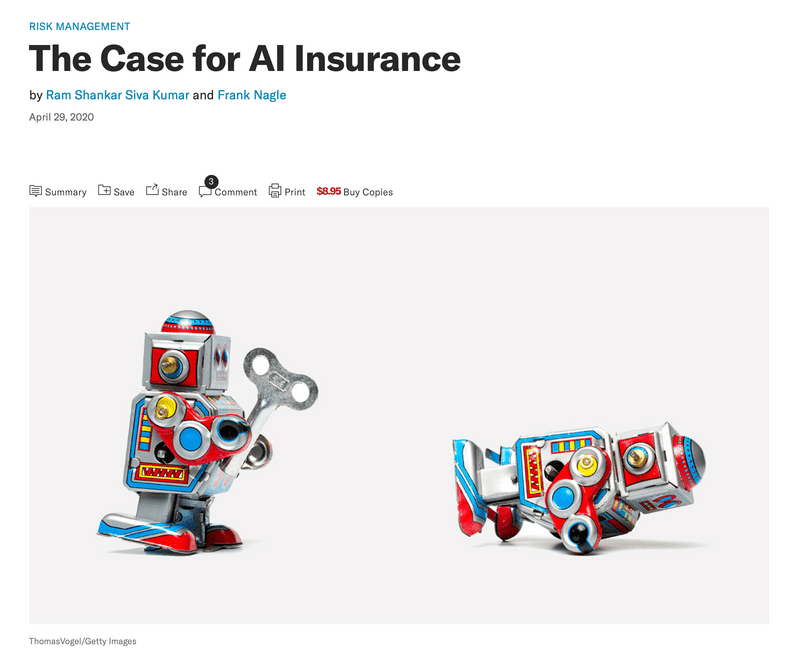 A tweet about AI and insurance (again, no robotics): 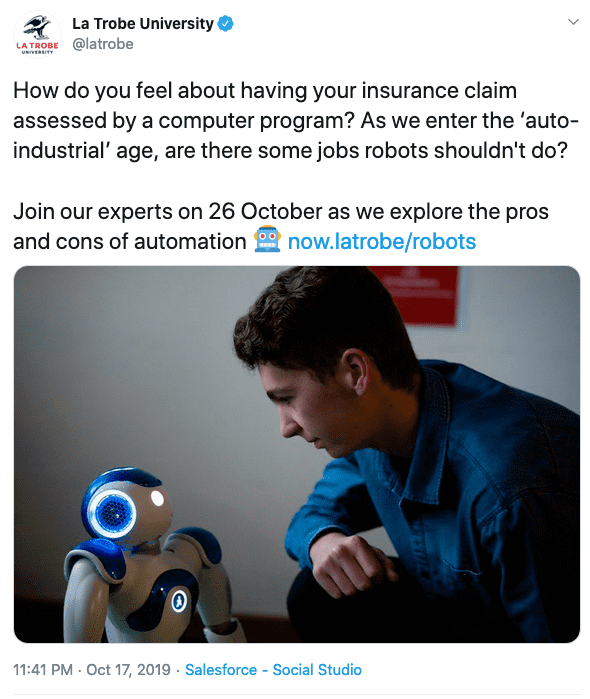 In these three examples, there is no real problem with the robot picture itself; it’s rather its placement next to an article or discussion that has nothing to do with robots. In fact, the robots in the first and third examples (R2D2 from Star Wars and a programmable humanoid robot called Nao) are pretty cool robots. At the same time, the fact that the article only talks about forms of ‘AI’ which are essentially just fancy data-driven computer programs means that there is something quite misleading about making the connection to sci-fi robots like R2D2 or even to existing robots like Nao.

Finding ‘pure’ examples of this category of ‘inappropriate placement of okay robot picture’ is quite difficult, however, because in addition to being inappropriately placed, pictures of robots tend to be really, really terrible. As such, let us now turn to the second phenomenon: terrible robots.

So what makes a robot picture terrible? Well, there seem to be a few typical ways in which things can go wrong, so here is a non-exhaustive list of the main offenders:

Let’s look at these one by one.

One of the most common ways that pictures of robots are awful is through absurd sexualisation of the robots and perpetuation of gender stereotypes: 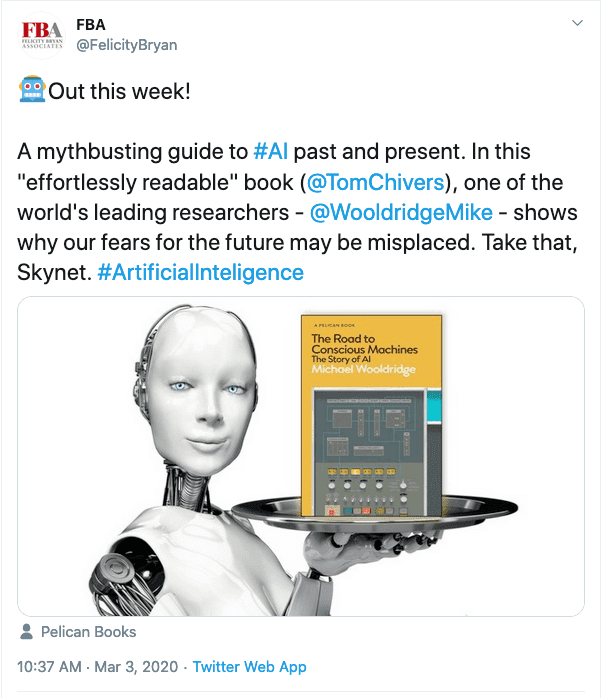 Looking at this tweet from Pelican Books, it's obviously questionable whether a robot holding a book on a silver platter is the best way to illustrate a book that claims to be a ‘mythbusting guide to AI.’ Even ignoring that decision, however, we still have to ask why the robot needs to be sexualised: why does it have ‘breasts’? Why does it have a smirk and a ‘seductive’ gaze? And, moreover, why does the promotional material for a book about AI need to picture it being presented on a silver platter by a female servant?

There is, unfortunately, no shortage of examples of this phenomenon. One news outlet chose the image below to illustrate an article about a study that investigated whether people reacted differently to robots depending on whether they were black or white: 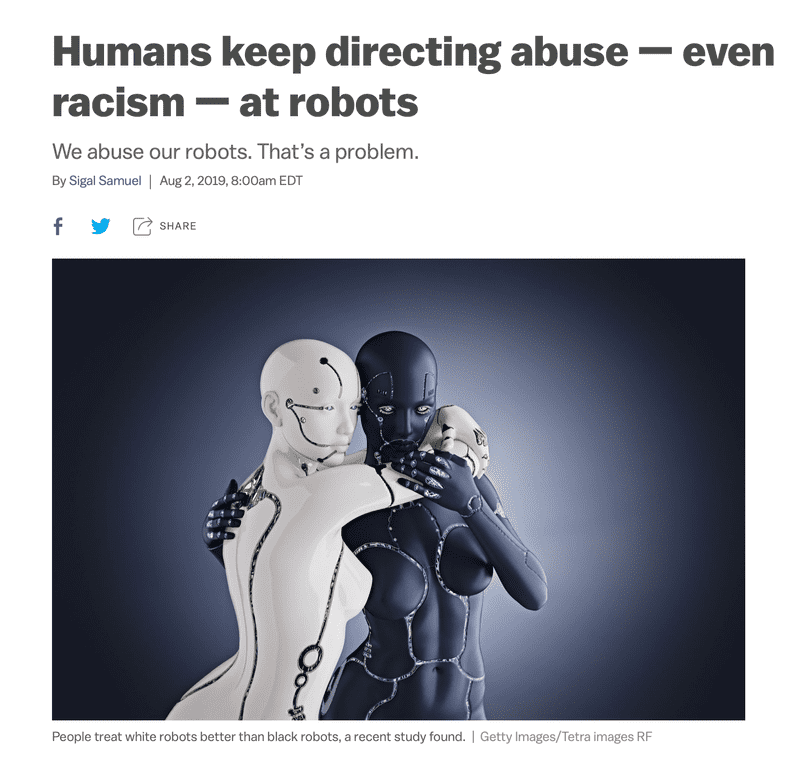 Presumably the robots in the study did not have breasts and toned abs, so why this picture? Would it not have been more appropriate to feature a picture of the actual robots used in the study?

Another absurd robot that pops up quite often is this one with unnecessary breasts and, bizarrely, some kind of incredibly inconvenient wires coming out of its head: 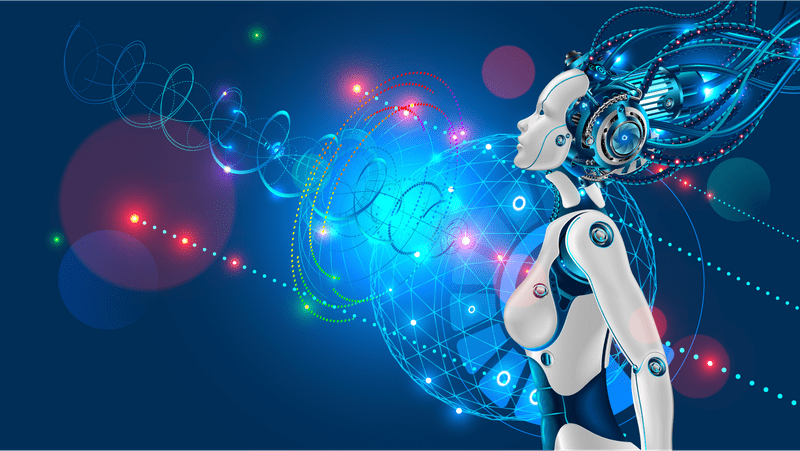 The sexualisation of pictures of robots (and real life robots) is just part of a huge problem in the broader field of AI. Much has been written about the harms caused by the

gendering of AI assistants,
See, for example, Alexa Steinbrück's article, Personified Machines, or UNESCO's report I'd blush if I could for an examination of the gendering of AI technology
such as Amazon’s Alexa, and we have also seen how AI systems can perpetuate gender bias in hiring and allow for new forms of harassment against women. For more on these issues, see the myth "AI can be objective/unbiased".

Although stupid pictures of feminized robots with inexplicable breasts may not be the most serious form of gender discrimination in the field of AI, it could perhaps be the easiest one to stop. It would take nothing more than the simple step of not using pictures of feminized and sexualised robots to illustrate articles about AI. And, on the most basic level, not giving robots breasts. 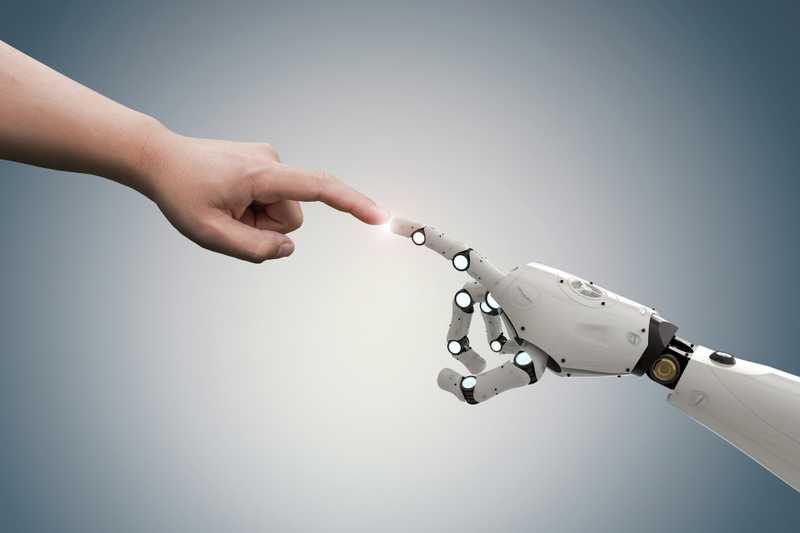 Another notabe feature of these robots is that they are overwhelmingly white, and so are the humans that appear alongside them. As Dr. Beth Singler discovered in her investigation of the ‘AI Creation Meme’ (an example of which is pictured above), in the 79 examples of this meme that she found, the human hand in all 79 cases was white, and, to come back to our previous point about gender, the human hand was male in 78 out of 79 cases.

Beyond just this example of white human hands appearing in these pictures, there is also the overwhelming whiteness of the robots themselves. A quick search of any of the large stock image databases for the term AI reveals that most of the images are of white robots. Why are they always white? Is it because it’s a ‘neutral’ colour?

default colour
David Gunkel has been tireless in pointing out the unbearable whiteness of these images on his Twitter account. A related discussion has also taken place about the diversity of emojis, see for example _Emoji diversity: how 'silly little faces' can make a big difference _ For a discussion of the problem of whiteness as a default, see Why is white the default?, by Josh Nguyen, and Sarah Ahmed's article, A phenomenology of whitness
. In their paper, The Whiteness of AI, Stephen Cave and Kanta Dihal note the seriousness of this overwhelming Whiteness when they say that “AI racialized as White allows for a full erasure of people of color from the White utopian imagery.” By centering whiteness as the default colour of the future, these images contribute to envisioning a technological future that excludes people of colour in much the same way that Big Tech today does.

Do robots dream of unnecessary appliances?

A less serious, but no less prevalent, form of terribleness can be seen in the plethora of ridiculous images of robots using electronic appliances for which they could have no conceivable need. Among the most common offenders are: 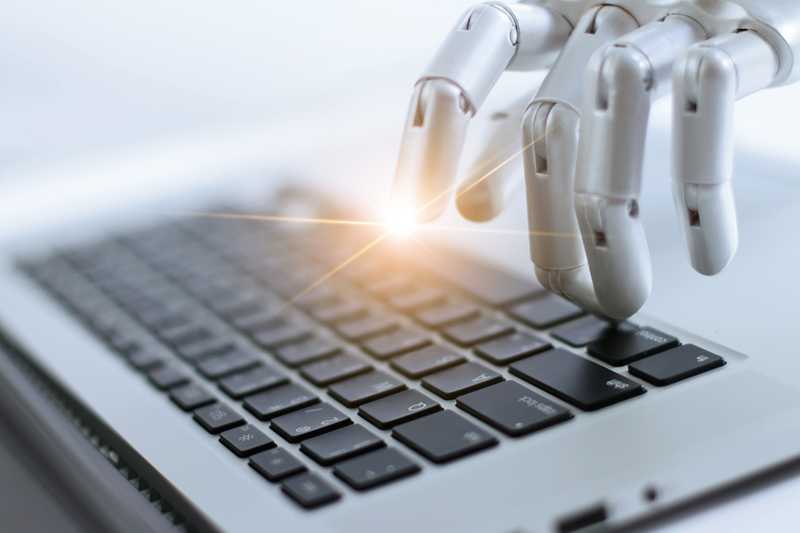 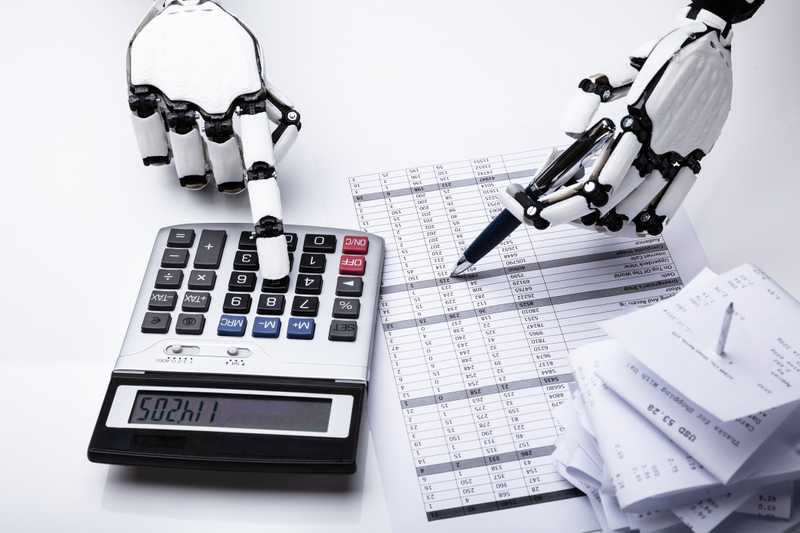 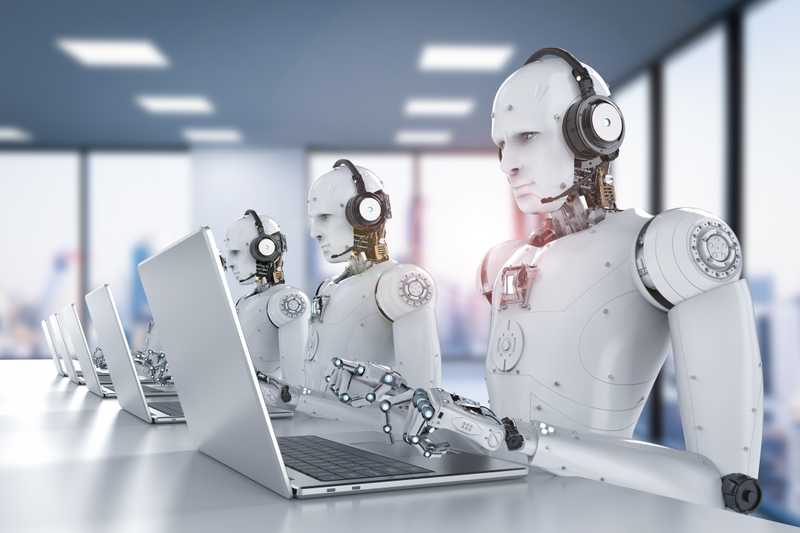 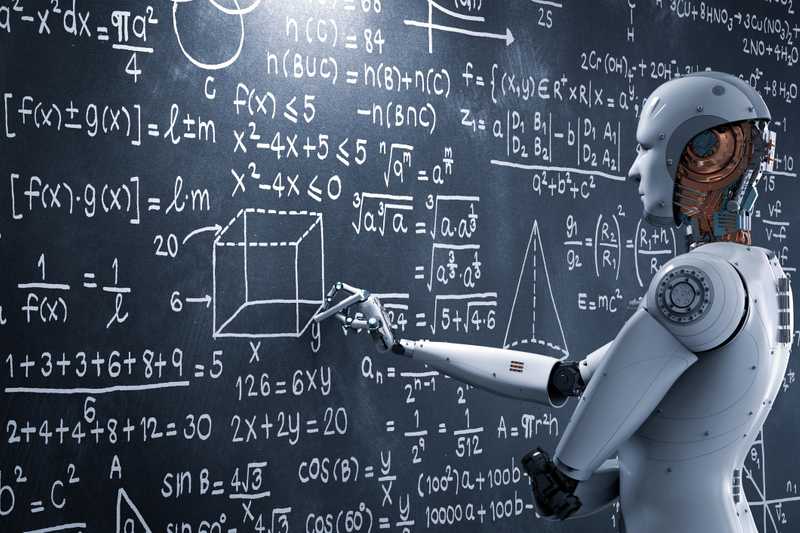 ...and robots wearing headphones, typing on keyboards and having loads of flying neon ‘internet symbols’ emerging from their chest:

We have even found a robot using a stethoscope, into which the creator of the image somehow managed to shoehorn a semi-naked woman just to make things more unnecessarily terrible: 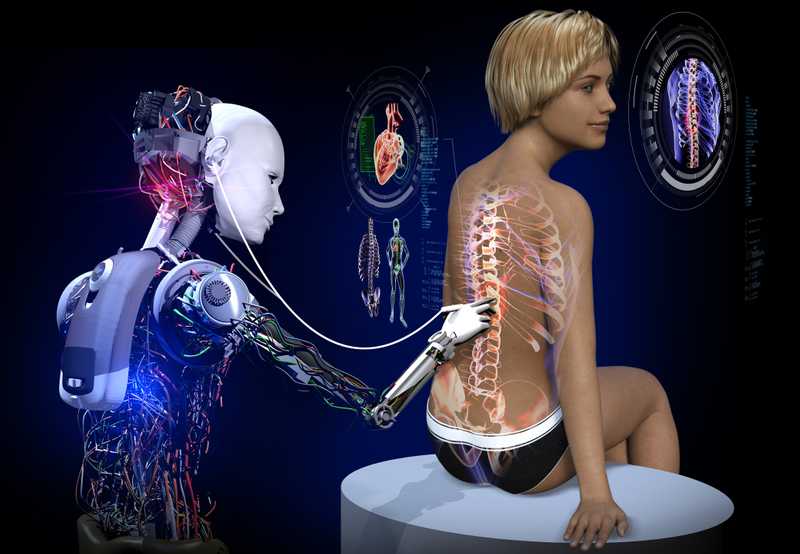 Finally, and least seriously, there is an entire genre of images of robots that just look plain crappy. There are many ways in which these images of robots end up looking awful, but here are a couple of illustrative examples: 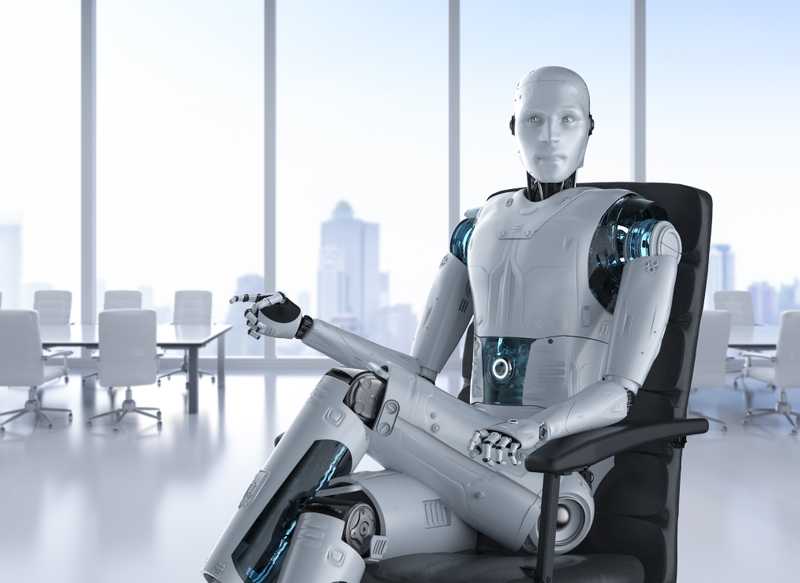 Robot with very pronounced eyebrows (and unnecessary breasts) looking at a digital brain: 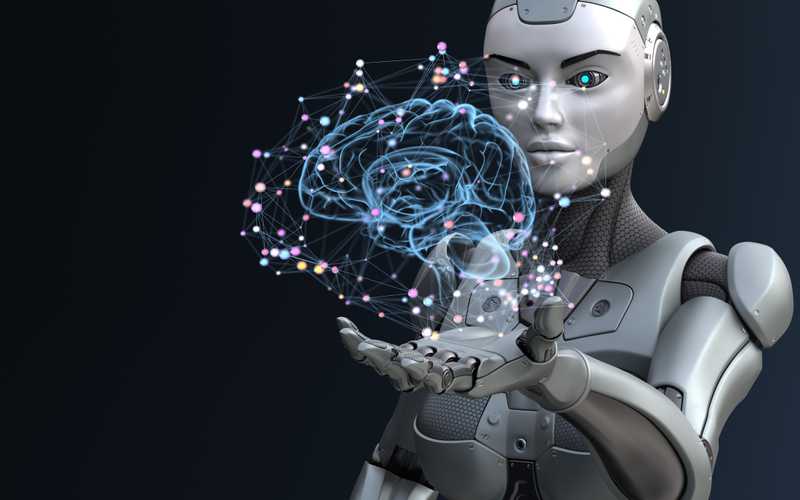 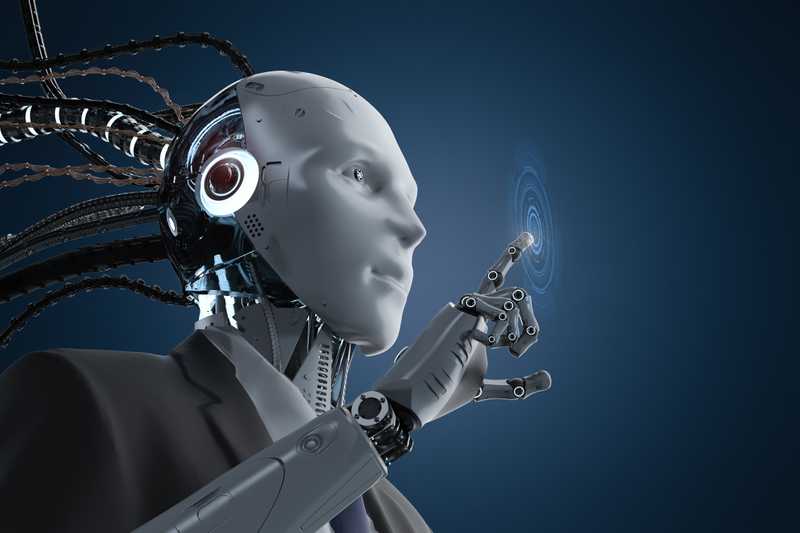 There seems to be no end to the ridiculousness and innovative terribleness of these pictures, so we won’t attempt to be exhaustive here. However, if you want to delve deeper into this, we recommend checking out this project, Is Seeing Believing, from Anne Trouillet Rogers and Lisa Talia Moretti who have analysed over 1,000 images depicting AI. Their analysis goes beyond what we've discussed here, taking in the brave new world of big blue brains and vortexes of big data, and providing a fascinating analysis of how we envision and imagine AI.

How can we stop the terrible and inappropriate robots?

Although there are many more serious problems with robots to which we should all devote our energies, such as the Campaign to stop killer robots, the problem of inappropriate and terrible robots is relatively easy to fix, so it's worth noting a few positive actions people could take.

To avoid the problem of inappropriate robots, there is one simple rule: if your article or report is not explicitly about humanoid robots, do not illustrate it with a picture of a humanoid robot. It’s that simple.

However, just to make it abundantly clear, here are some examples:

Things get only marginally more complex for the problem of terrible robots. If you have affirmed beyond all doubt that you actually need a picture of a robot, there are a number of considerations you should take on board:

We do, of course, acknowledge that representing AI visually can be quite a challenge. Nevertheless, we do have faith that with some minimal effort, we could stop using inappropriate and terrible pictures of robots to do the job. Below you can find some examples of alternative approaches to illustrating AI, along with some suggested readings to explore the problem of representing AI more deeply.

Did we miss something in our discussion of inappropriate and terrible pictures of robots? Is there another paradigmatic way in which these images end up looking awful? Or do you have a particularly good example to share? Please get in touch and let us know!

Alternatives to inappropriate and terrible robots

If you're looking for pictures of real robots to accompany an article that's actually about robotics, one cool resource is the ABOT database: http://abotdatabase.info/collection Here you can find pictures and information about real, existing, humanoid robots.

For a thorough analysis of robot pictures, and representation of AI in general, check out Is Seeing Believing, from Anne Trouillet Rogers and Lisa Talia Moretti. Not only do they provide an insightful and comprehensive anaylsis of existing representations, they also challenged a number of artists to propose alternatives.

We've also gathered some resources to help you dive deeper into the problem.

Check out NotMyRobots, a collective of researchers who keep tabs on the worst robot pics on the internet. Follow them on Twitter for regular updates of the worst robots.

Dr Beth Singler has produced excellent work on this topic and other related ideas. See, for example, here article: The AI Creation Meme: A Case Study of the New Visibility of Religion in Artificial Intelligence Discourse

On the related issue of representing 'Big Data', see this article from Christian Pentzold, Cornelia Brantner and Lena Fölsche: Imagining big data: Illustrations of “big data” in US news articles, 2010–2016

On Afrofuturism, check out this piece on How Afrofuturism Can Help the World Mend, this TED talk from Nnedi Okorafor on Sci-fi stories that imagine a future Africa, or this video on why Afrofuturism is not just Black sci-fi

Please get in touch and let us know of any other resources that we should include here!